This is essentially multiple blog posts cobbled together into a static page. Enjoy the dis associative writing styles! I started this in May of 2016. It’s been two years.

At first I thought I could not possibly make a joke about pillows/cushions, but I realized I could. And I won’t. Progress? Possibly.

At first I was just going to make red seat cushions but how could I say no to parrots? Easily. I hate parrots. My friends parrot bit me on my finger unprovoked when I was in college. It hurt. But maybe this will help the healing begin?

Once again, I turned to the English summary of cushions Textiel in Context by Hanna Zimmerman. I learned:

I requested Zimmerman’s article, Sixteenth Century Appliques from NESAT IX and got some more detail than what was listed in the English summary in the book.

Maria’s inventory leaves a lot to be desired when it comes to materials listed. Red, but what material? Going off of what I have learned so far about textile production in the Low Countries in the 16th century and Maria’s socio-economic status, I am going to use a madder red wool broadcloth for the front of the pillow. This is backed up by the color and fiber analysis of the find in Groningen, though dye contamination from the materials being in contact with each other under ground is also a possibility.

Because madder was found in all fragments, it’s possible the madder from the cushion contaminated the other pieces. If this is the case the colors of the appliques would have been different.

The largely intact extant find from Groningen has an outer border and an inner frame of 2cm wide wool strips and I have remnants of a gold twill that would look amazing on the red, or I will use a teal wool twill tape that is 3/4″ wide. I will applique a parrot in the middle of the cushion in the inner frame and I will use blue, teal, and green wool remnants. I will attach the appliques to the cushion using a linen thread. Between the inner and the outer frame I will applique leaves and rosettes like the extant find. I will use green for the leaves. For the rosettes I’d like to use a cream or white wool. I’ll couch them down using wool thread.

Enjoy this crude drawing of my plans – I’m a pretty terrible artist.

With the help of the Elizabethan Costuming group on Facebook I was bombarded with extant images of 16th century embroidered parrots. I was still holding out for an applique parrot and I hit the jackpot while perusing the V&A online and found an applique parrot who is hiding in the left corner of this bench cushion cover.

I had 4 different people tell me to do 4 different things with the applique. Slate frame, scroll frame, stretcher bars, stretcher bars with backing because the wool has stretch. I ended up not putting it in a frame for a number of reasons. The wool is springy and it was more hassle than I found it to be worth.

Previously I mentioned I disregard the advice given to me by the experts. I thought I could go why in a little more detail.
The first person I asked suggested a slate frame. Those are expensive, and I wasn’t sure if given my motivation for this project that I’d ever do needlework again.
I asked someone else, who suggested that I did not need a slate frame because applique does not require the intense tightness that something like gold work does.
Another friend suggested I use a scroll frame, but I need to see the whole of the project at once, or at least be able to quickly see it all at once in terms of applique placement which I’m more or less eyeballing.
Another friend suggested I use stretcher bars.
I bought a q-snap frame because I did not want to spend a ton of money. Well friends, spending money on the wrong thing is a terrible idea. The wool has too much stretch for a frame like that.
I again consulted the friend who suggested the stretcher bars. I was like “eh, I can spend $30 bucks on this!” When I went to a highly recommended needlework store and told the owner my project intentions, she was super rude and disregarded everything I said about making a reconstruction of a cushion find from the 16th century but I bought the stretcher bars anyway.
When I got home and tried the stretcher bars, I realized they were not the way for me to go for a few reasons. I like sitting at my desk to sew. As a result I’m able to keep the fabric relatively flat to begin with. After some ridiculous anxiety over methods used, I just went with it. Most of the existing tension issues will likely be irrelevant once I stuff it with the feathers.
In the below image I’ve laid out the appliques to give you an idea of placement. The brown leaves will likely be couched with gold, and they’ll have “veins” as well. The blue rosettes are going to be couched with the green wool I laid over the rosette, and they’ll be divided up into 4 petal sections. I’m not sure what color I’ll couch the pale green rosettes with. Once everything is tacked down, I’ll also assemble my parrot applique. 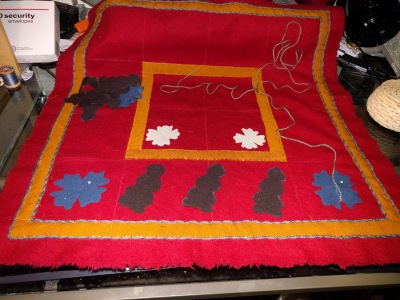 And about 2 years after starting, here’s where the pillow is at. I’ll get there, or not, eventually.